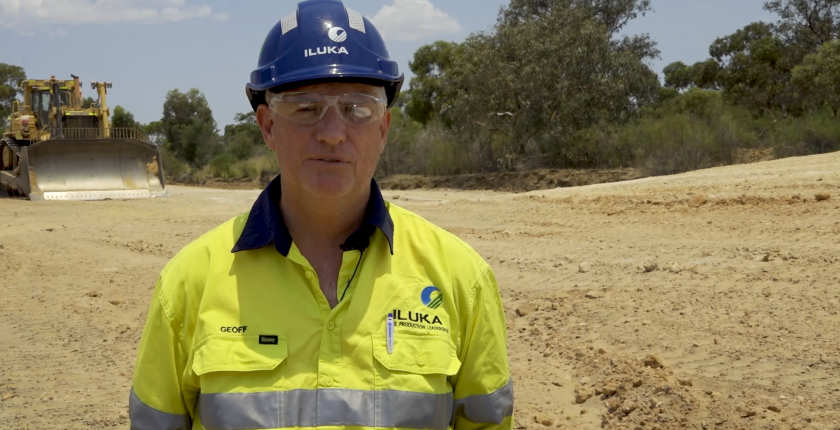 Geoff Dyer’s career journey provides a neat little illustration of the changing face and nature of mining in WA over the past few decades.

Initially he headed north to work for Robe River Iron in the late 1980s because it seemed like the thing to do.

“It was probably more peer pressure than anything else. All my friends were in iron ore back in those days,” Dyer said.

“I’d been in farming and it seemed like a good opportunity.”

Fast forward a little more than 30 years and that good opportunity is still going – only it’s totally different one to when Dyer started.

These days he’s the Mid West Rehabilitation Manager for Iluka Resources at the company’s Eneabba site, a job he says is a little like “mining in reverse.”

“I originally moved to Eneabba in the processing plant,” Dyer recalled.

“As things changed and my skills set grew, I had opportunities within Iluka and ended up on the mining side of things, which then flowed through to rehabilitation.

“The opportunities to use the skills I developed to put the landscape profile back and do revegetation, has been a great one. Mining and rehab really go hand-in-hand.”

Rehabilitation is a vital aspect of Iluka’s activities at Eneabba, where mining originally started in the 1970s.

Iluka’s rehabilitation efforts amid trying climatic conditions at Eneabba have been so successful that only a carefully trained eye can notice the difference between the natural Kwongan ‘scrub’ and a revegetated area that has been established for 20 or so years.

Those efforts have kicked up a gear since the introduction in 2019 of a nifty piece of innovative machinery known as Flora Restorer.

“Flora Restorer is a combination of all our rehabilitation activities into one machine – whether that be seeding, fertilising, seed burial or imprinting,” Dyer said.

“It’s really 50 years of skills and knowledge rolled up and has done a lot to increase our germination rates and allow us to cover more hectares with the seed we do have.”

Dyer isn’t certain whether his previous career in farming made him naturally gravitate towards the rehabilitation side of mining – although he agrees there are obvious synergies between the two.

He believes his own ability to shift career is indicative of the wide breadth of varying opportunities that are available to people in the WA mining and resources sector.

Dyer himself is now only a couple of years off hitting the 30-year mark with Iluka.

“Rehabilitation of native vegetation is much harder than farming but also more satisfying,” he said.

“The processes are very similar and both are all about collection of seed and growing things.

“I think for anybody wanting a lifelong career, then mining is a great option. I’ve done mining and processing, been a survey assistant and now the rehab side of things – plus all the jobs in between at all levels.

“The opportunities are endless and you get to grow and develop. That’s important both on a personal level and for the business you work for.”