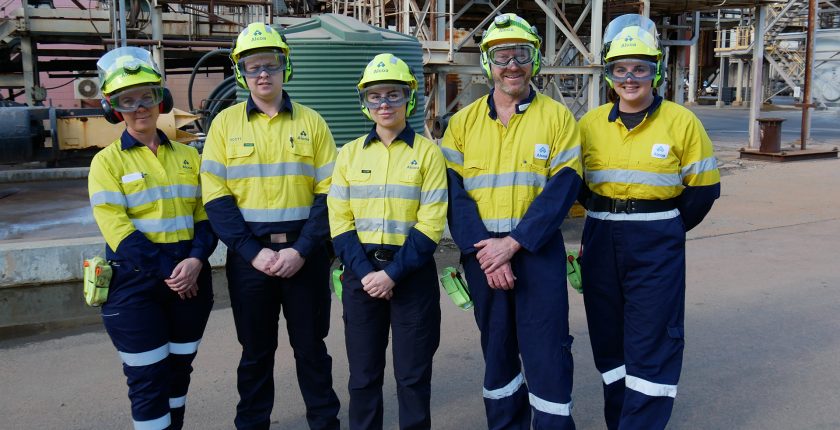 As a long-time police officer who had spent time working in the Pilbara, Stuart Edwards had seen former colleagues and friends go into the mining and resources sector and flourish.

But with FIFO work in the State’s North West not an option for family reasons, he feared opportunities available to him in the sector might be limited.

That was until he saw an advertisement for a trainee process operator with Alcoa.

“I got my CV done up and I didn’t really think I stood a chance because I had no experience in that role,” Edwards explained.

“But coming over to Alcoa I realised there were lots of interchangeable skills that I already did possess.

“One of the skills I’ve been able to carry over from my policing career is communication – speaking to people, taking direction, communicating clearly and also having a really strong focus on safety.”

Edwards is one of 16 newcomers who joined Alcoa earlier this year as trainee process operators at the company’s three refineries at Pinjarra, Wagerup and Kwinana.

Chosen from more than 1500 applicants and coming from a wide variety of previous jobs, they are proof that mining and resources represents a very viable option for a career change.

Among Edwards’ trainee cohort is Kayleigh Moeller, whose transition to refinery working life involved something of a cultural change.

She had moved to Australia only four years ago from the Netherlands, where mining makes up just a fraction of a per cent of gross domestic product.

“We’ve got old coal mines [in Holland], but that’s about it,” Moeller explained.

“Coming here, I learned that mining was still big and made a lot of friends who were working in mining.

“You learn a lot from that perspective. But if I talk to my family back home, they just can’t imagine [my job involving mining].”

Moeller, who previously worked front-of-house at wineries and in security in Australia, also found that she had transferrable skills for her new role – chiefly people skills.

She says she loves how busy her traineeship keeps her and the continual learning that comes with it.

“You are building your knowledge and there is no end line for that knowledge. If you want to keep on learning, Alcoa will give you that opportunity.

“For the time I’ve been at Alcoa I’ve never had a dull day.”

For Haylee Eaton, her traineeship is a switch back to mining and resources after originally taking time out to have a family, and stints working in tourism and real estate.

“I’m able to be home every night to see my kids. The work-life balance [at Alcoa] with rosters and shift work fits in with family,” Eaton said.

“There was obviously a bit of a challenge and a learning curve, particularly given I’ve never worked in a refinery before.

“But property was a lot to do with people management and tourism is customer service-focussed.

“Now, working within the refinery, we have clients upstream and downstream from us in different operations centres. So that customer service element is still there.

“People management and working within a cohesive team environment is pretty important in any job but more so working in a refinery with some of the hazards that are associated with it.”

Scott Brown, like Eaton, has been quick to embrace the family benefits of his traineeship at Alcoa’s Pinjarra refinery.

Brown had a 10-year career as an electrician before joining Alcoa and had worked FIFO roles as part of that.

“Working those long rosters, I sort of wanted a career change to come back closer to home and be there every night with the family,” Brown said.

“I’m really enjoying the challenge of learning something new here and I really feel like I have a bright career ahead of me at Alcoa.

“The possibilities are endless if you are keen and willing to put in the work.”

Ella Page had worked at the now-defunct BP Oil Refinery in Kwinana, when she noticed the Alcoa traineeship pop up in her Facebook feed.

She applied, got an opportunity and is eager to keep learning on the job.

“Safety was the number one skill that I brought across from my previous job,” Page said.

“My favourite thing about working for Alcoa is that everyone is really welcoming. I’ve learned everything that I need to so far and I’m excited to continue my traineeship.”

The 16 trainees will finish with a Certificate II and III in Process Plant Operations, and include seven people from the Peel region, seven from suburbs south of Perth and one each from the South West and Kwinana areas.

In keeping with the WA mining and resources sector’s growing commitment to a diverse and inclusive workforce, eight of the trainees are women.

Each of the five trainees interviewed for this story say they wouldn’t hesitate to encourage others to follow in their footsteps.

“The advice I have for people that are considering changing roles to the resource industry is just to give it a go,” Edwards said.

“I was a bit hesitant and cautious at first, but now I’ve been here for almost six months, I’ve really enjoyed the change.

“You learn on the go, it’s exciting, and there are lots of opportunities in the future.”

Eaton’s advice is even more succinct.

“The only opportunity wasted is one that hasn’t been taken. So go for it,” she said.